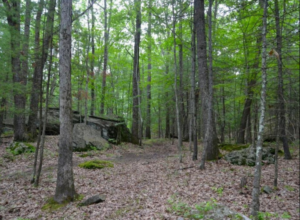 Tucked away at an undeveloped area of land not visible from Rt. 6, Harmony Presents will bring performances to a new home. The entertainment stage for lesser known artists was created when Henry Skier of AMSkier Insurance, wanted to bring performance to the modern-day Hawley Silk Mill.

Jill Carletti Merrill, managing director of Harmony Presents said the entertainment “feeds a lot of peoples’ heart and souls” as a “cultural experience” is offered in the small town of Hawley. Since the bands aren’t mainstream, they offer listeners a “totally unique experience.” An additional aspect is that people are able to meet others and get to know the artists and with the new location, Carletti Merrill said that “same vibe” will happen.

Skier created the Wildflower Music Festival at Dorflinger Suydam Wildlife Sanctuary in White Mills. He said he had no idea what was to come, when he requested the Boiler Room to be used for something when the Silk Mill was remodeled. It was because of Carletti Merrill however, that he largely credits Harmony Presents’ success.

Initially, trying to make the Boiler Room attractive, Carletti Merrill would decorate the room with papier-mâché to look “festive” with lamps and such decorations she said. Eventually, the patio was added which added an element to the setting.

The Boiler Room, Skier said wasn’t meant to be the forever home of Harmony Presents, so there could be performances in “other venues.” Now, Skier in seeking a zoning variance to construct something on 14 acres of land he owns not far from The Dime Bank Lake Region Center on Rt. 6. As of yet, the only known definite of the location, is the parking. Other than that, whether it is more than an “acoustical tent” that is a year-round scene hasn’t been decided. But, it is known that with its location in the woods, road noise won’t be heard. Carletti Merrill called the location a “cool spot.” The change and plans, Skier said is “exciting.”

Since its start, getting entertainers to come to Hawley has become easier, as Carletti Merrill has made contacts and now, Mary Chapin Carpenter will perform in Scranton for the Pocono Environmental Education Center in October. This show, will be Harmony’s largest yet. Since its start, there have been about 500 shows, sometimes with repeat performers and many repeat listeners as well as many regulars.

In My Wildest Dreams

In a new location, Carletti Merrill said the plan is for more concerts that will “benefit other causes.” The blend of music and performance, she believes gives a “special quality to an area.” An additional idea is that Harmony Presents will aid other organizations that may not get the attention they deserve. Giving that warranted attention, Carletti Merrill likes.

With the new location, Harmony Presents which is also a production company will become more then performances, as Skier has plans for In My Wildest Dreams, which features people who, in their wildest dreams could not have imaged they would accomplish the feats they eventually did. See inmywildestdreams.org for more information.

As for time, Carletti Merrill said they are looking at something happening this year, once approval is received for the variance. While waiting, however, they are seeking out tents and assistance from contacts Skier has with an architect to figure how they can make things come together. The location, Skier said is “beautiful” and “begs to have something on it.”

Where her heart lies

Having performers “not yet known” is where Carletti Merrill said her “heart lies” because she enjoys the “discovery aspect” of finding new entertainers who offer new music. As well as introducing the performers to other people. Despite the performers not being mainstream, Skier noted that the shows are not “amateur” since they are “professional and dedicated.”

Before they perform at Harmony, Carletti Merrill views the professional videos, reads their biographies and checks their photos. She generally finds them as they are touring the northeast. Harmony Presents has become a place that performers like she said, because people are there to listen to the music.

Skier credits Carletti Merrill’s “skill” for making Harmony Presents into a success. To attract new performers and have an audience grow, more room is needed and the hope now, is that the venue will give Harmony a “chance to grow” as he owns the land around the planned location.

While the Boiler Room was great, the reality is that it is “pretty limited” Skier said, and it doesn’t have a “look” he wants because if sitting in the back of the room, people are basically looking at others’ heads. Details like the stage aren’t quite what Skier would like and the sound system isn’t what it could be, because it is a small room. As a fan of music, Skier likes music to be loud. If the structure is no more than a tent, the “look” has to be something special, Skier said. He hopes though, that the architect can create something special because winter is a concern. The interior, he wants to be changeable since all events may not be musical.

With Harmony Presents, Carletti Merrill believes the limited space in the Boiler Room fit best for the musical performances. Now with a new location, there are possibilities for theatrical performances while being different than the Ritz Theatre. Harmony, Skier said is about “pleasing the community and making Hawley a better place.”

People for the most part, aren’t aware of what the future has in store for Harmony Presents, not that there’s a surprise, but the end of the Boiler Room is happening now because Settler’s Hospitality plans to use it for other occasions.

Last month, Linda Vose was at the Boiler Room with her husband Tom where they listened to Les Poules à Colin from Quebec. Linda said the experience was “awesome” because being in the Boiler Room offered a “cozy nice environment” with “fantastic music.” Linda has been to several shows, and she has found many of the musicians to be good. The live music, she believes “releases serotonin” and makes her happy. The last performance Gold Magnolias, Linda called “freaking awesome” and they will have people dancing on tables while dancing with the audience.

Harmony Presents, has led Tom to seek out more live performances because there are many good local musicians that are “incredible” he said. Live music is different, as people sing, clap their hands, laugh and tap their feet.
As a musician herself, Carletti Merrill believes music and art are important as she also likes the idea of making a difference and building relationships, so through Harmony Presents, she said it has felt “meaningful to provide something like this beautiful experience.”

Despite the many shows over the years, only four bands have persuaded the entire audience to get up and dance, one band being The Gold Magnolias who will be the last performance in the Boiler Room July 21.